The war is not over with us. When your county is in war, you have to choose sides; says Brigitte Huynh, the owner and editor-in-chief of The Little Saigon Daily News. ANA VENEGAS, STAFF PHOTOGRAPHER

In a Westminster office adorned with photographs of her grandchildren and a statue of the Buddha, publisher Brigitte Huynh waved a copy of her Little Saigon Daily News, jabbing a bright pink fingernail at a banner across the front page.

“It says ‘The Voice of the Non-Communist Vietnamese,’” she translated, her voice rising to a near shout. “I created this newspaper because I have one dream: I want to see the Communist government collapse!”

In Orange County’s Little Saigon, Huynh counts as a media mogul. Her Vietnamese-language weekly magazine, with a local staff of 19 and a stable of freelancers, claims a circulation of 70,000 in 31 cities from Seattle to Washington, D.C. At 120 pages, it is fat with advertising. Until recently, she published a daily newspaper, too. 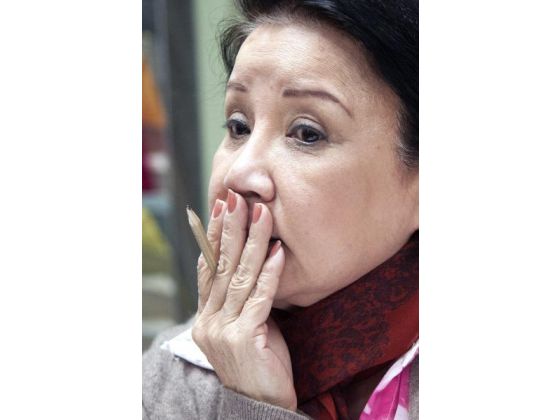 In December, an Orange County Superior Court jury slapped her with a $4.5 million fine for defamation – a penalty that she said would put her out of business. The jury found that a 2012 column she had written libeled the Nguoi Viet News, a rival newspaper, and its CEO with false rumors of their supposed Communist ties.

The judgment, which Huynh plans to appeal, is not simply a skirmish in the cutthroat world of newspapers, magazines, television and radio stations that vie for the hearts and minds of the nation’s 1.7 million Vietnamese.

It is also the latest chapter in a decadeslong struggle between the Vietnamese-language media and the fierce, sometimes violent anti-Communist refugees who migrated to the United States after the fall of Saigon in 1975.

From 1981 to 1990, five Vietnamese journalists were assassinated in the U.S. for alleged affronts to the anti-Communist cause, including Tap Van Pham, the editor of Mai, a Garden Grove entertainment magazine who died when his office was torched in 1987.

A group called the Vietnamese Party to Exterminate the Communists and Restore the Nation took credit for the arson and for several other slayings.

Since then, no journalist has been killed, but death threats, protests, boycotts and lawsuits continue to plague Vietnamese media, particularly in Orange County, home to 207,000 Vietnamese – the largest concentration outside Southeast Asia.

“The attacks have tapered off, but now and then there is an explosion,” said Jeffrey Brody, a Cal State Fullerton University communications professor who has written extensively about Vietnamese media. “The most common smear used against a business or political opponent is the McCarthyite tactic of accusing them of being Communist.”

The 2012 clash between Huynh and Nguoi Viet came as each was encroaching on the other’s business. Huynh, who also goes by the name Hoang Duoc Thao, had expanded her Little Saigon News enterprise, with its successful magazine, by launching a daily newspaper.

Nguoi Viet, the largest and oldest Vietnamese daily, with a print circulation of 15,000 and 60,000 daily Web visitors at the time, had begun spinning off new weekly magazines around the country.

“Before that, we were not directly competing,” said Dat Phan, 66, Nguoi Viet’s CEO. “We did our thing and they did their thing.”

Nguoi Viet, whose lobby displays a mural of George Washington, Thomas Jefferson and Abraham Lincoln, is down the block from the red-white-and-blue storefront of Little Saigon News. The same cul-de-sac, Moran Street, hosts two smaller dailies, Viet Bao and Vien Dong, along with Saigon TV, whose neon sign reads, “The New Wave in Media.”

After Huynh printed her column, headlined “Secrets of Nguoi Viet Daily News: Who is really the owner of NV Daily News?” Phan demanded that she retract her suggestion that the paper may be owned by Communists, with Phan as the owner “in name only.”

“It was unbelievable,” Phan said in an interview, spreading his arms in frustration and noting that the paper is owned by all its salaried staffers under a employee stock ownership plan. “The fabrications in the article were so illogical.”

The jury also determined that Huynh’s column defamed Nguoi Viet’s sales manager Vinh “Vicky” Hoang, a 64-year old mother of eight. Huynh wrote that Hoang is “a person who has no intellectual abilities … she is also a person who has many bad reputations (sic) about her love life.”

Hoang testified that she has never been unfaithful to her husband, yet the column spread across the Internet and caused members of her church to shun her. “I have the feeling that … I have a huge open scar in front of my face, in my heart,” she said. “I have to carry this humiliation for the rest of my life.”

The Little Saigon News publisher testified in court that she had printed “rumors” about Hoang’s private life, for which she had “no evidence.”

Despite that, Huynh has refused to retract the column. “I never regret one word that I said. If you don’t speak your mind, you can’t write,” she said in an interview. 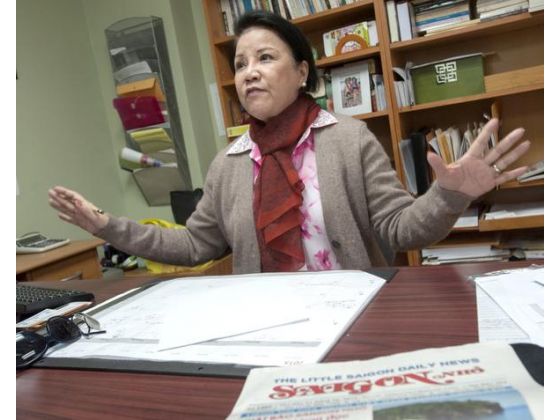 Huynh recalled that a Vietnamese radio host once labeled her “a prostitute,” which caused her to lodge a complaint with the Federal Communications Commission. Lately, the epithet has been recirculated by her critics on the Internet, she said, adding with a chuckle, “At my age, when I read that, I take it like a compliment.”

Huynh contended that her column had nothing to do with commercial competition and that it discussed Nguoi Viet New’s politics in a“humorous” fashion.

Still, she said, when Nguoi Viet “keeps repeating things that are pro-Communist, then of course people are angry.”

Indeed, over the years, no publication has been so besieged by anti-Communist critics as Nguoi Viet News. “We are very anti-Communist, but we are always being accused of being pro-Communist,” Phan said.

In 2008, hundreds of protesters demonstrated for months outside the newspaper’s offices after it published a photograph of a foot spa painted in the red-and-yellow colors of the South Vietnamese flag.

The foot spa was a student art project intended to honor the artist’s mother-in-law, who worked in a nail salon. But protestors charged that printing the photograph, which was on page 194 of a Lunar New Year special section, was disrespectful to the flag.

The newspaper sued several protestors, saying that they had assaulted staff, screamed obscenities at customers, urinated on cars and shredded newspapers. A judge issued a restraining order, and a jury found that the protesters were trespassing. The lawsuit was settled after the protesters agreed to withdraw their demonstrations to public property.

Then, in July 2012, Nguoi Viet News published a letter from a reader calling himself Son Hao, celebrating the Communist victory and denigrating South Vietnamese nationalists as “Americans’ traitorous Vietnamese lackeys.”

Phan said the letter came over the Internet and an editor printed it without knowing anything about the author because he thought it was “funny.”

That was “a dangerous mistake,” Phan acknowledged. “Our readership is so sensitive. They still feel the hurt from what they suffered under the Communists.”

The editor responsible for publishing the letter was fired and Phan apologized publicly in a meeting with community leaders.

Nonetheless, a manifesto signed by 151 organizations and individuals launched a boycott, accusing Nguoi Viet News of “acting repeatedly in a traitorous manner against the nationalist ideology to benefit the Vietnamese Communist Party.”

Brody, the Cal State Fullerton professor, applauds the December jury verdict. Until recently, he said, Vietnamese media “were unfamiliar with American libel law. They didn’t sue. And publications had no assets, so a victory would get you nothing.

“But in the last few years, Vietnamese Americans have turned to the American justice system to seek remedy against red-baiting,” he added, citing recent cases in Colorado, Texas, Minnesota and Washington state.

The willingness to go to court comes as the generation that fought the Vietnam War is aging and their children have become Americanized. Money and care packages flow from Orange County to Vietnam. Holiday flights are often booked with émigrés visiting relatives back home.

Nonetheless, a divide persists in the media.

Nguoi Viet News embraces the mainstream ethic. “We are trying to be professional, unbiased and accurate,” Phan said.

The paper wouldn’t consider carrying an anti-Communist banner, such as the one that ran on the front page of Little Saigon Daily News. “We don’t need a slogan,” Phan said. “It would be kind of ridiculous.” 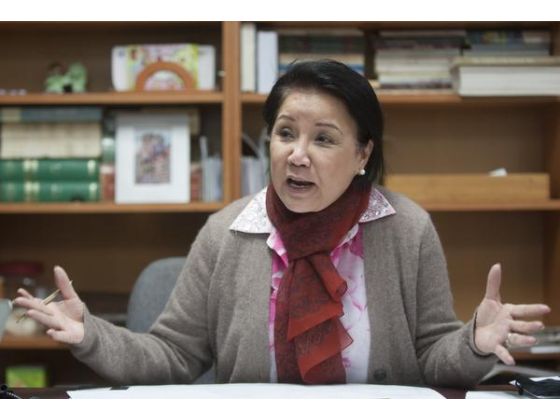 But Huynh rejects the idea of an “independent” newspaper. She wouldn’t report any positive news about Vietnam’s government, she said. “The war is not over with us. When your country is in war, you have to choose sides.”

Huynh has assets, including a warehouse building and printing presses. But she said she lost $1.5 million from 2008 to 2013 on her daily newspaper spinoff, and she owes $250,000 in legal fees. Her magazine “breaks even,” she said.

In the past few weeks, a legal defense fund has sprung up to raise money for her appeal. But if the $4.5 million verdict stands, and Little Saigon News goes out of business, she said, “The Vietnamese anti-Communist community will survive after I am gone.”